The store will not work correctly in the case when cookies are disabled.

Subcribe to our newsletter

Sign up for our newsletter to be updated on the latest designs, exclusive offers, inspiration and tip!

THIS IS NOT A COMPETITION

Not limited number of examples

The collection of photos THIS IS NOT A COMPETITION was collected according to the theme of the international festival of contemporary art Kyiv Art Week 2019 and presented in the gallery Spivakovska ART: EGO.

Past and present events in Ukraine and the world make us concerned about our future. We often want the principles of common sense or self-preservation to work. Will there be an understanding that functioning systems are interdependent? And that only cooperation, not competition, will prolong the happy life of humankind.

A look into the past, its analysis, will help to understand that the competition for justice and self-interest at any cost leads to catastrophic consequences in society, from the smallest subject of society — the individual, family, class — to nations and states.

With my photographs, I draw attention first of all to the period of communist, socialist competition, which lasted in Ukraine for almost a century. At peak socialist times, in 1970s-80s, there were over 300 forms of socialist competition in the USSR in order to build communism across the world.  Pretty slogans and promises left in the ruined buildings in my photos remind us how it was possible to mislead millions of people, to turn them into puppets. But it was a system that took millions of lives in its own society, primarily Ukrainians.  Secondly, with my photographs, I emphasize that only after the Revolution of Dignity did the ideas of communism in Ukraine finally fade into the past.

The events that began in Ukraine on the Maidan in 2013 influenced the vector of Ukraine's development. But what awaits us in the future?  Will the political leadership and leading business be able to implement ideas that unite society, moving away from the ideas of communism? An idea that will turn into an action plan that will be implemented?

The processes of transformation in society should not be a competition “at any cost.” Only professional work for the development of societies and the country as a whole will bring on positive changes. And it is our participation in the formation of the new social architecture of the 21st century that will determine the events and changes of the future. 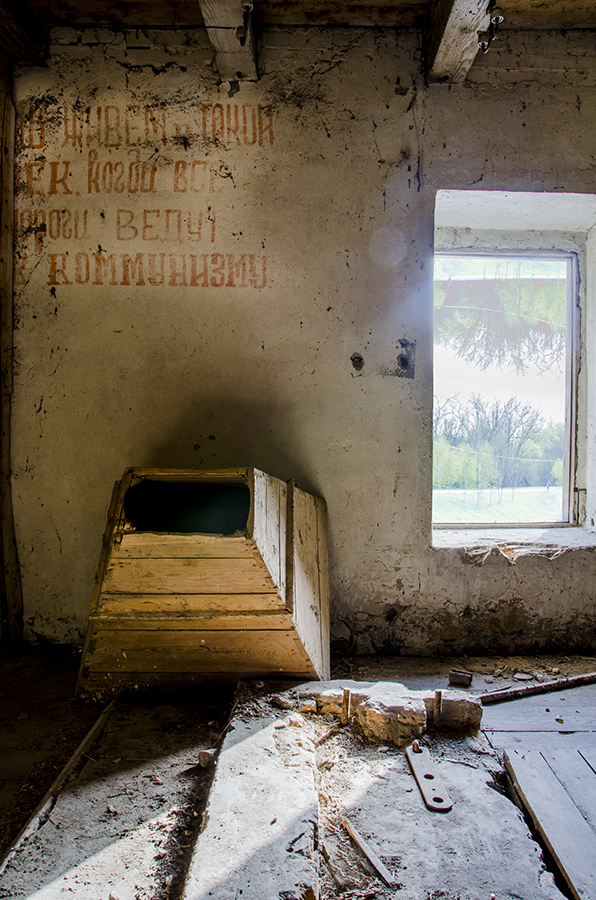 On the walls of the old mill you can see the promise of the revolutionaries of the communist future "when all roads lead to communism," which in fact turned out to be fiction, as hinted at by the mirage in the window. 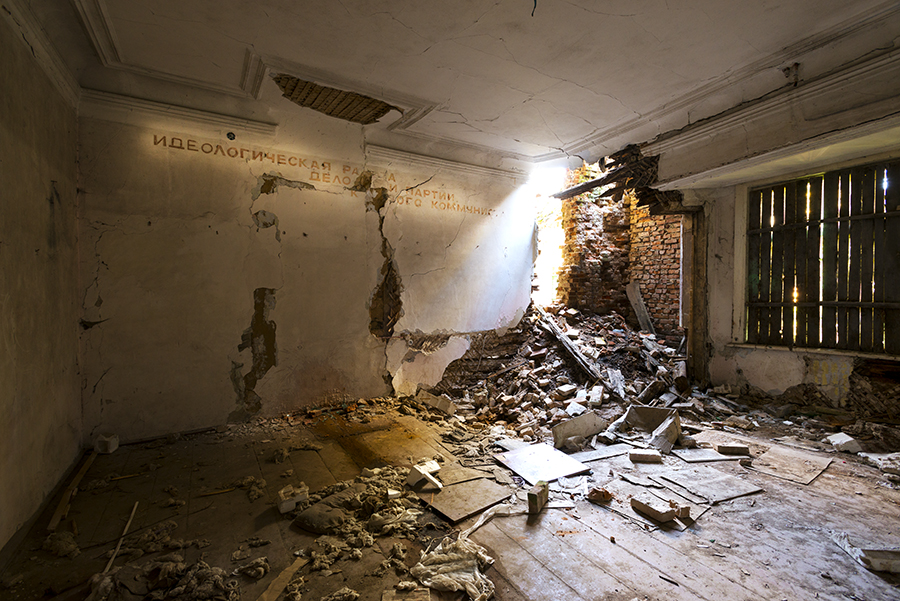 The abandoned room of the von Meck Estate symbolizes the people destroyed by the communist authorities as a result of ideological propaganda, which is emphasized by the slogan on the wall and the ruined to the bricks corner wall, as well as the fate of von Meck himself.

(The estate of von Meck (Kopyliv) is a historical complex located on the banks of the Buchanka River in the village of Kopyliv, Makarivskyi rayon, Kyiv region) The estate of Baron von Meck is closely connected with the history of three significant families that left a trace in the history of the Russian Empire, Ukraine and in world culture — von Meck, Davidov and Tchaikovsky. Nikolai Karlovich von Meck (1863-1929) was a Baron, a Russian businessman (owner of a number of railways), and a philanthropist. He owned estates in the village of Kopyliv, Makarivskyi rayon, Kyiv region. Since 1892, he held the position of the chairman of the Moscow-Kazan Railway. After the revolution he worked for the Bolsheviks. He was last arrested in 1928, and in May 1929, the OGPU Board sentenced him to death. He did not plead guilty. The report on his shooting was published on May 24, 1929. Academician Vernadsky, who knew first-hand the value of official accusations, noted that von Meck, who had voluntarily given up all his capital after the October Revolution, had been killed "absolutely innocently in public opinion." His son Mark was shot to death in 1918. His daughter Halyna was imprisoned in a Soviet prison. 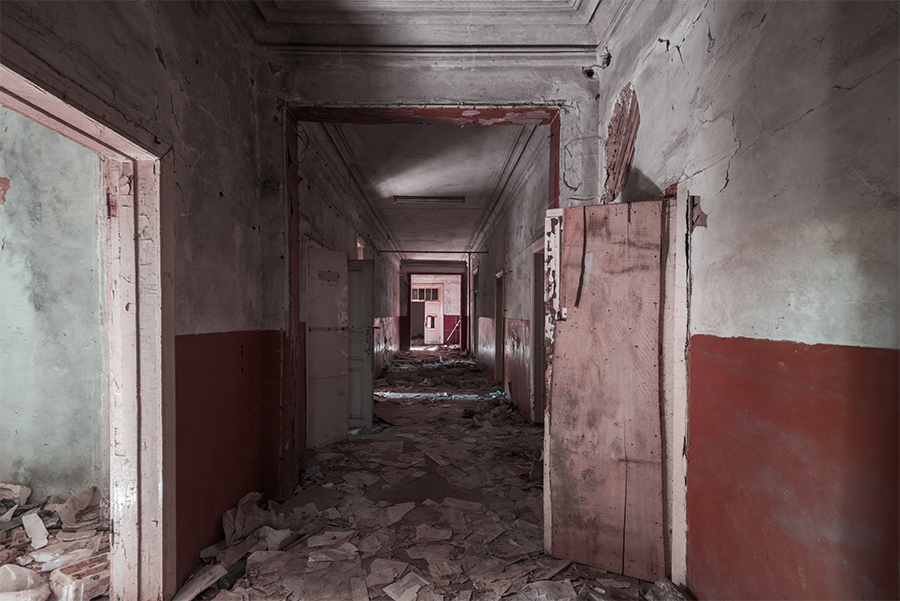 Through the perspective of repeated old doors and scattered papers, the composition forms a “shooting corridor” of innocent souls, reminiscent of the tragedy of the communist regime, which took people's lives for nothing and issued sentences on the basis of denunciations. 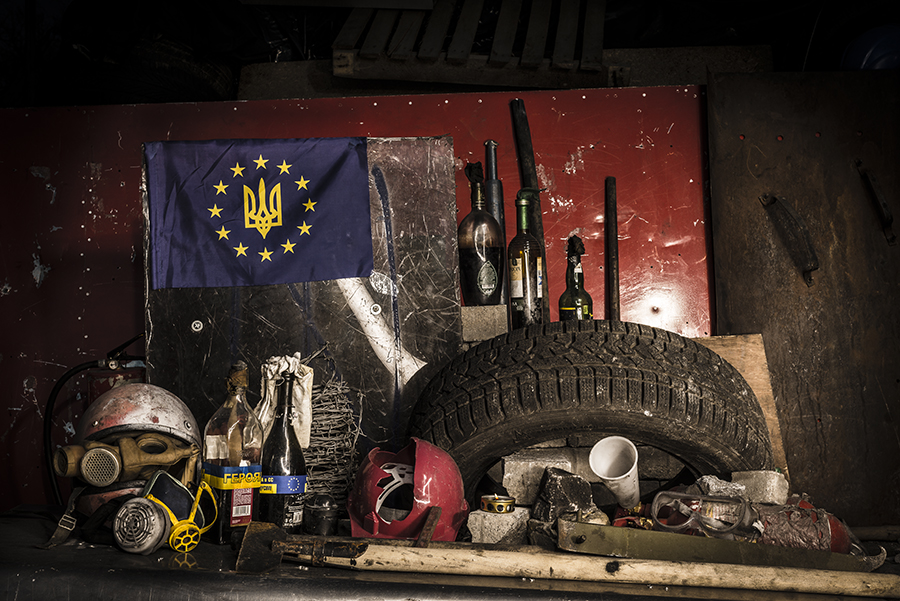 The author skillfully created a still life, where he highlighted the means of struggle and protection of the participants of the events on the Maidan, who dreamed of the European future of Ukraine, used new symbols and shed their blood for it.

5. “Lenin-Fall.” The trial of the executioner, MCC “Ukrainian House.” 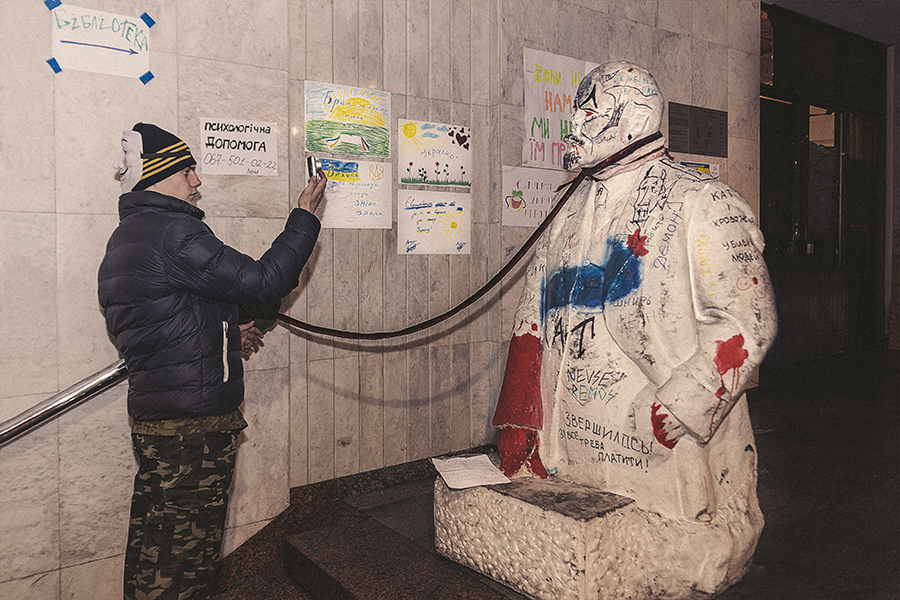 The author made unique photographs depicting a sculpture of Lenin, where the role of the leader of the revolution is traced and determined and where he is sentenced. 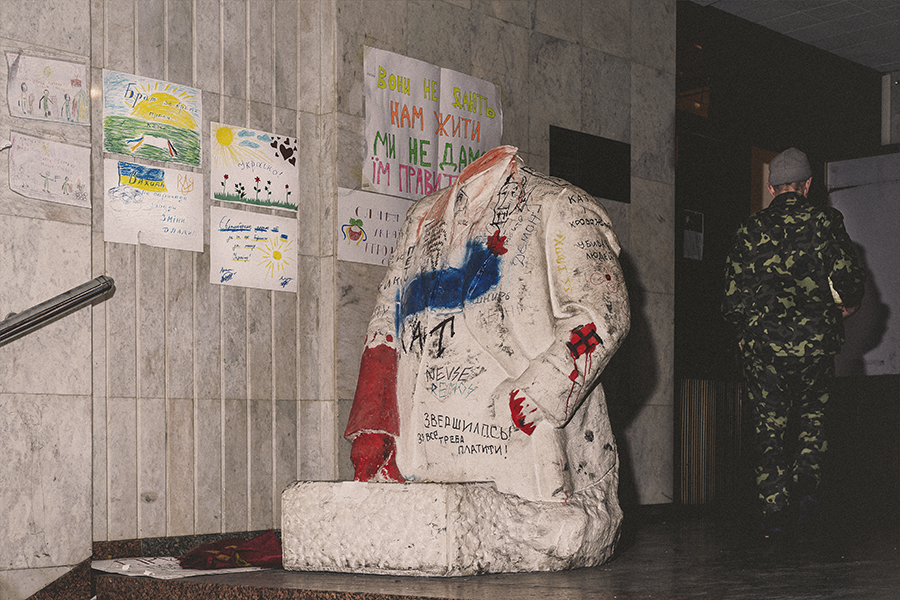 The executed sculpture of Lenin symbolizes the recognition of him as the main executioner and the culprit of tragic events in the history of Ukraine in the twentieth century, and the end of the communist era.

To purchase artworks, please email me.